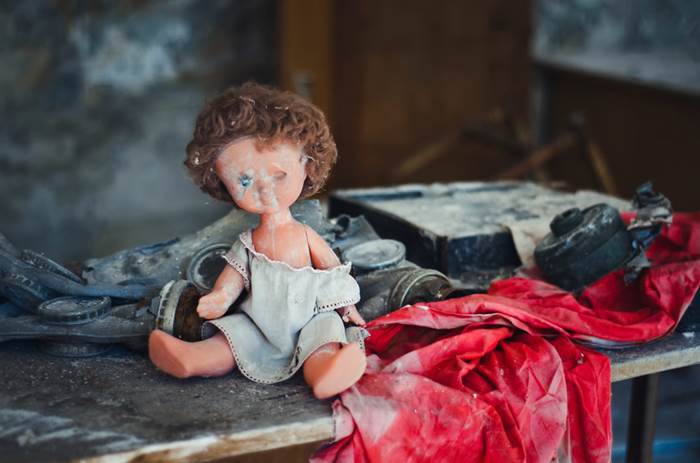 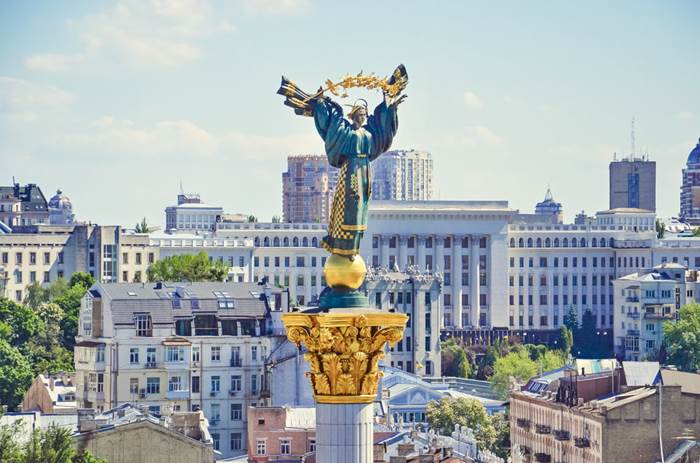 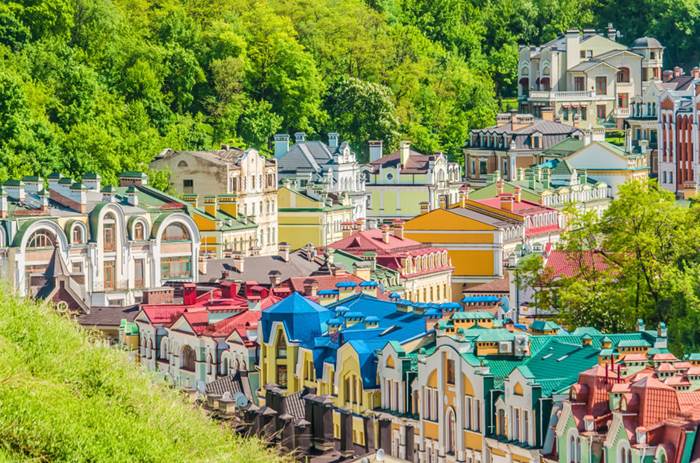 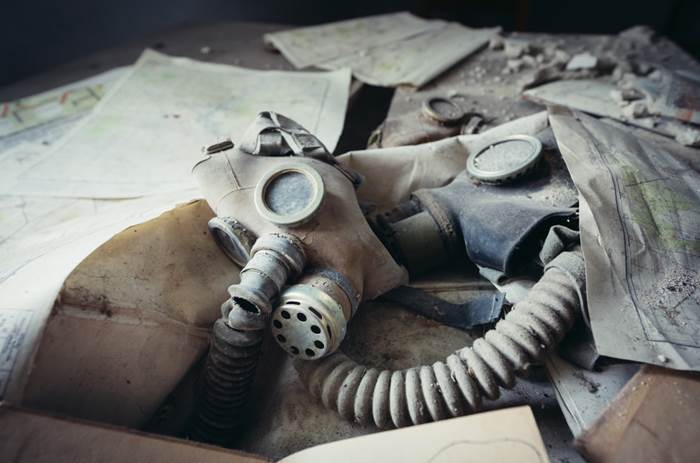 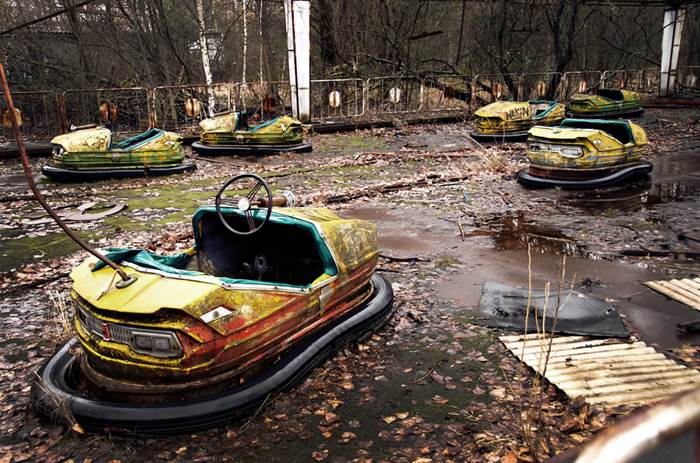 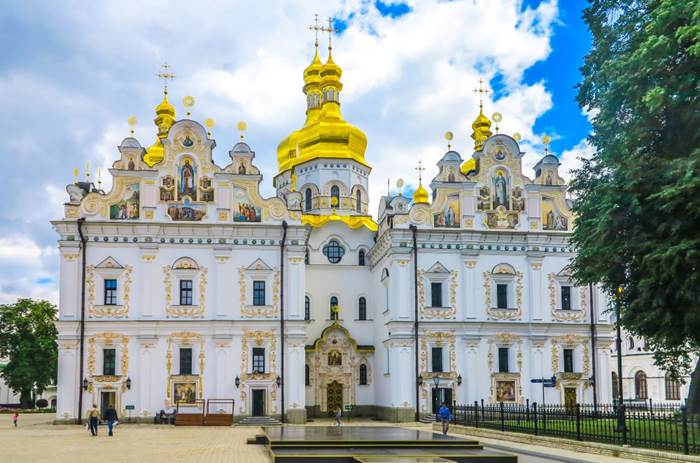 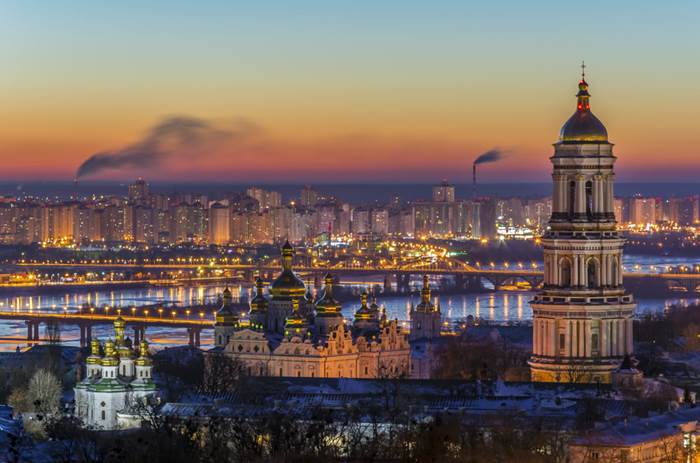 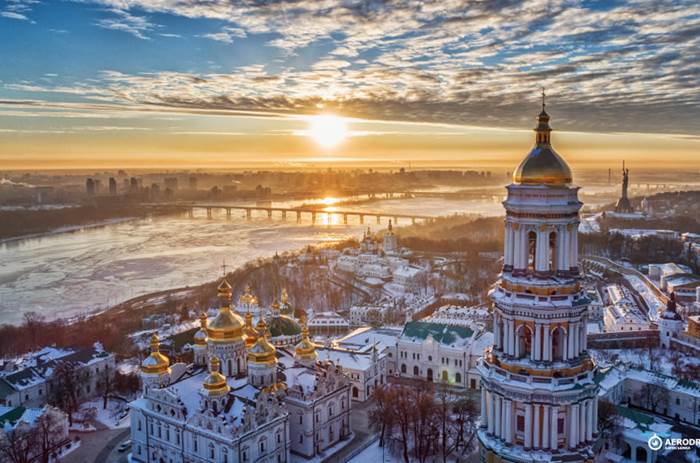 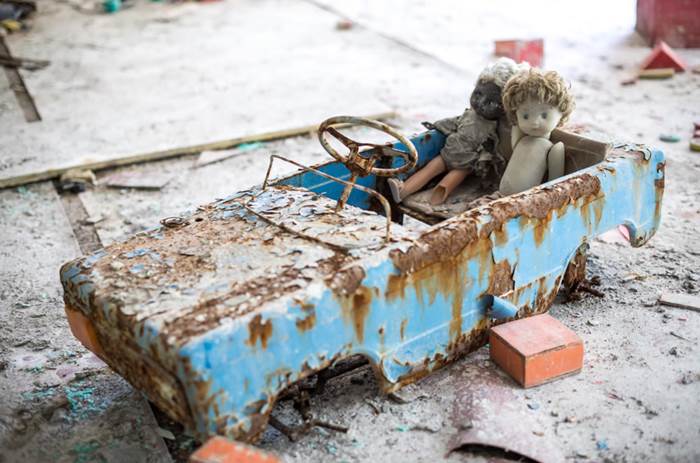 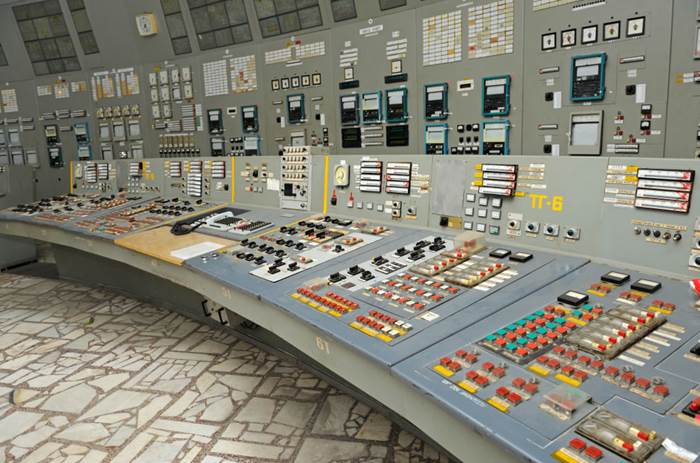 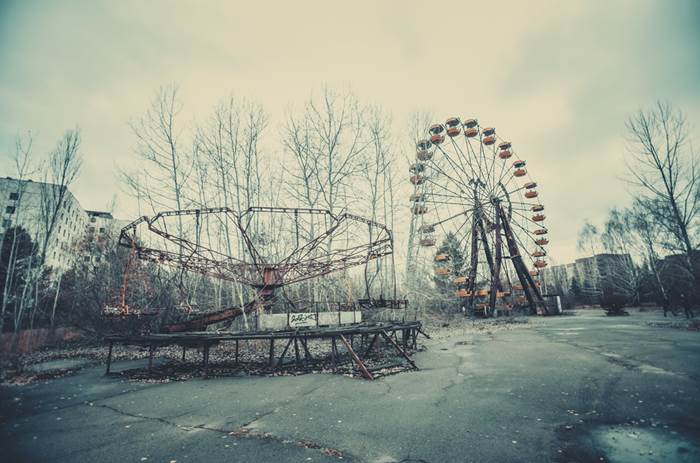 Spend an exciting long weekend like no other - exploring the incredible abandoned sites reclaimed by nature on a Chernobyl tour in the Exclusion Zone, which was created when the Number 4 reactor exploded back in 1986.

There are no activities planned today, so you are free to arrive in Kiev at any time. If you would like to receive a complimentary airport transfer today, you'll need to arrive into Kyiv Boryspil International Airport (KBP). For those arriving on time our leader will meet you in the hotel reception at 8pm for a welcome meeting and for those that wish, there is the chance to go out for dinner. Should you miss the opportunity to go out for dinner, your leader will leave you information giving the meeting time for the next day in the hotel reception and will inform you of any essential information as soon as you catch up. The main trip briefing will take place on the morning of day two.

On this long weekend we have packed in as many highlights of Kiev as we can, but there is very little free time in the city, so if you wish to spend some time discovering more on your own, we would recommend extending your stay for a night or two. If you choose to do this, we'd suggest visiting the Museum of the Great Patriotic War, which is one of the largest in Ukraine and tells the story of the German-Soviet War in iconic and Brutalist style. It has over 300,000 items on display and memorials spread over 25 acres. It's here that the Mother Motherland statue is located and although we will see this from a distance during our city tour tomorrow, you might like to get up close and go up to the observation platform.

Please note that many of Kiev's museums close on a Monday or Tuesday, so if you wish to visit a particular attraction then please check that it is open on the day you want to visit.

We have a busy day today, as we aim to explore a selection of Kievs many historic sights and to get a feel for this great city. We'll start with a guided walking tour of Kiev, which is situated on the banks of the River Dnipro. This ancient city has been inhabited for almost 2000 years and it was once the capital of the Kievan Rus State, from which all later Russian states were descended. Although Ukrainian nationalism is stronger than ever, you will still hear Russian spoken here today. During our tour we'll see the onion domed exterior of Santa Sophia Cathedral, the Golden Gate which was once the main entrance to the city, Saint Andrews Baroque church and Mother Motherland, a 100 metre high statue to honour the heroes of the Soviet Union. We also visit the Chernobyl Museum. Exhibits are designed to teach us of the scope of the nuclear disaster and to ensure that the lessons learnt from this terrible accident aren't forgotten.

This afternoon we take the metro to Arsenalna, which is the deepest station in the world. We continue by metro to the Lavra Historical and Cultural Reserve and visit the remarkable 'Monastery of the Caves' founded in AD 1051, where the labyrinths provide all the natural conditions needed for mummification. We have a guided tour of the caves and have time in either the Museum of Miniatures or the Museum Of Historical Treasures and the Holy Trinity Church.

The evening is free to relax and have dinner.

This morning we set off on our exciting explorations to the Chernobyl Exclusion Zone, which is about two hours' drive from the city and close to the Belarusian border. Back on the 26th April 1986 the Number 4 nuclear reactor at Chernobyl exploded with catastrophic consequences. Since then an Exclusion Zone has been in place around the plant and nature has reclaimed the towns and vehicles left within this. The accident was the result of a flawed Soviet reactor, operated by inadequately trained staff that had been ordered to carry out a poorly planned test.

There were four reactors and a further two being constructed when Reactor 4 exploded twice, killing two workers and releasing at least 5% of its radioactive core into the atmosphere. A further 28 fire fighters died of radiation poisoning following the accident. At the time this was the largest uncontrolled radioactive release recorded.

The city of Pripyat was built three kilometres from the site to house the plant's workers and their families and, at the time, it had 49,000 inhabitants. Within a 30 kilometre radius of the power plant, there was a population of up to 135,000 people. All were evacuated after the accident and most of these towns and villages including Pripyat are now ghost towns.

Surprisingly after the accident the other reactors at Chernobyl were restarted. Their safety was improved but due to energy shortages the last reactor wasn't turned off until December 2000. In 2011 Chernobyl was declared safe enough to be recognised as a tourist attraction.

Reactor 4 was enclosed in a large concrete shelter which was erected quickly after the incident and contained around 200 tonnes of highly radioactive material. The old shelter only had a shelf life of 30 years and at the end of 2016 a huge 'New Safe Confinement' structure was built on the site and moved into place over the old shelter. It is the world's largest movable structure and inside a team of robotic cranes is taking the old shelter and radioactive core apart in an effort to make the area safe again.

On our first day of discovery with a local guide we will explore Pripyat including the fairground, hospital, hotel, bus station, fire station, football stadium, sports centre, elementary school, kindergarten, police station, Palace of Culture, church and the 'bridge of death'. We'll also see the Red Forest and the structure around Reactor 4. The attractions seen in the Chernobyl Exclusion Zone may vary depending on local conditions and restrictions, but we'll see the most possible during our two days spent here.

This evening we will have the unique experience of staying within the Exclusion Zone in a small hotel within the town of Chernobyl. The bedrooms are simply decorated and there are two bathrooms shared between every five bedrooms. There is a restaurant and bar where we will enjoy a traditional Ukrainian meal this evening.

Today we will most likely see Pripyat's swimming pool, grammar school and music school and visit the secret Soviet Duga Radar Facility. The radar military base was named Chernobyl 2 and didn't appear on any civilian maps and the trees were strategically planted to block the view from the neighbouring towns. There are two radars here that were constructed as part of a Soviet early missile detection system. The bigger of the two is almost 500 metres long and around 150 metres high. Also on the site are an abandoned fire station, small power plant, hospital and apartment buildings where the military personnel stationed here and their families would have lived.

We will also hopefully get the chance today to speak with people still living within the Chernobyl Exclusion Zone, who are known as self-settlers. A year after the accident over one thousand people returned to their homes and despite efforts from the authorities they kept returning until eventually being allowed to stay and they have been living off grid ever since. Many of the people who choose to return were retired at the time and since it has been over 30 years since the disaster many of these people have sadly now passed away, so many of the towns and villages in the Exclusion Zone now only have one or two people living there. We should be able to meet with a couple of the self-settlers to hear their stories of what their lives were like before, during and after the explosion.

Late this afternoon we drive back to Kiev for our final free evening in the city.

The trip ends after breakfast at our hotel in Kiev.

You will spend one night within the Chernobyl Exclusion Zone at a simple hotel with two bathrooms shared between every five bedrooms. Bathrooms are equipped with a sink, shower and toilet. Bedrooms are simply decorated. The food served here will be traditional Ukrainian cuisine and there is a bar within the restaurant.

In the evening the doors of the hotel will be locked at around 22.30 and you are not permitted to venture out into the Exclusion Zone without a guide being with you at all times. The television service here includes no English speaking channels, so you might like to bring a tablet computer, electronic reading device, MP3 player or pack of playing cards with you for evening entertainment. 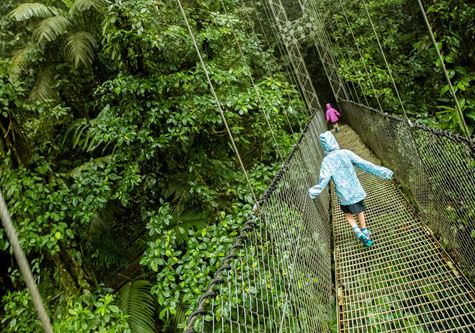 Explore! Family Rainforest Adventure
Towering volcanoes, long sandy beaches and unspoiled tropical rainforest are all part of this holiday to Costa Rica. Journey from the Caribbean to the Pacific ocean through one of the most biologically diverse countries in the world. 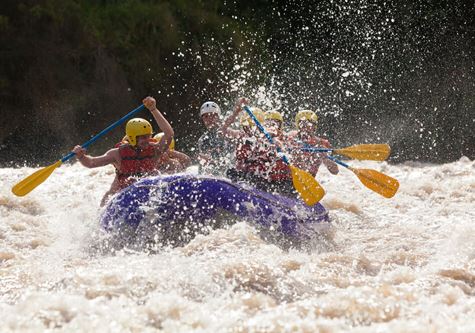 Explore Family Croatian Active Adventure
Join us for a week of exciting activities in stunning Croatian landscapes. Based on an island just off Trogir and by the beautiful Dalmatian coast, we enjoy the thrills of whitewater rafting, try out sea kayaking and take the challenge of canyoning through caves and waterfalls. 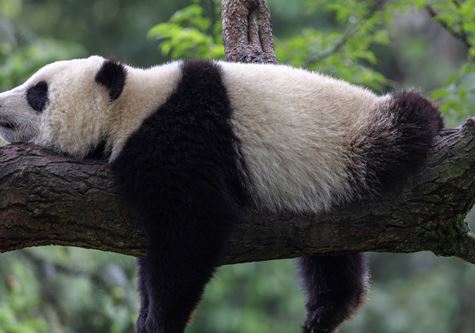 Explore! Family China in Depth
Travelling across China using a combination of overnight sleeper and ultra-modern high speed bullet trains, this fast-paced journey takes us from the imperial palaces of Beijing to the skyscrapers of Hong Kong. Trip highlights include Xian's Terracotta Army (and making your own army figure), giant pandas in Chengdu and the rural town of Yangshuo. 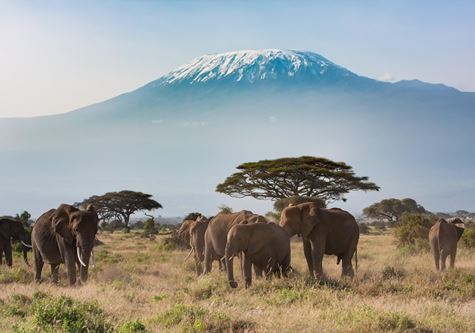 Explore! Kilimanjaro - Lemosho Trek
Take this Explore trek to the summit of Mount Kilimanjaro going to Uhuru Peak, the highest point in Africa. 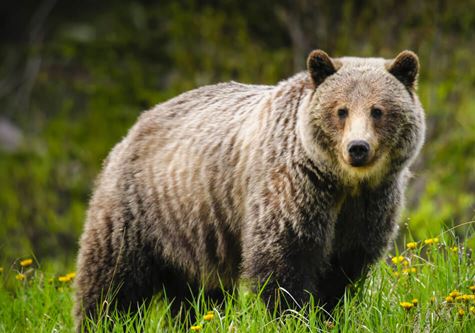 Explore Family Canadian Adventure
From hot springs, emerald-green lakes and rushing waterfalls to the amazing cities of Vancouver and Calgary, this trip explores many of Canada's natural highlights with a number of walks in national parks. We discover the vast Athabasca Glacier and Falls, the Island of Victoria and Lake Louise. 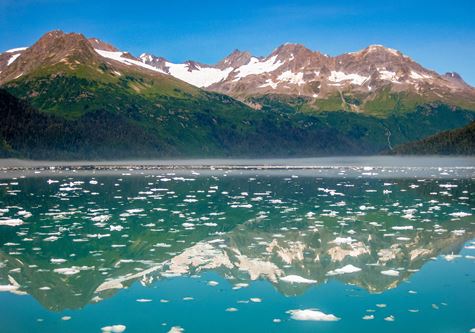 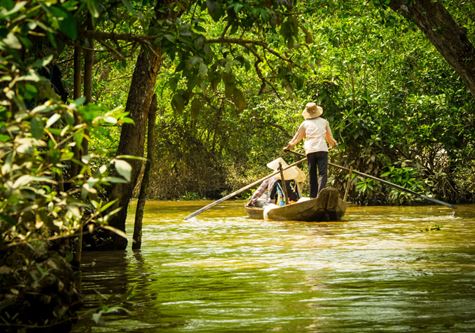 Explore! Family Discover Vietnam
Experience an exciting introduction to Vietnam and Cambodia as you travel along the coast from Hanoi to Ho Chi Minh City and then onto Siem Reap. On this fun-filled adventure, you'll sea kayak around the island cliffs of Halong Bay and descend into the maze of tunnels remaining from the Vietnam War.
Why Book With Us?
Find Out More