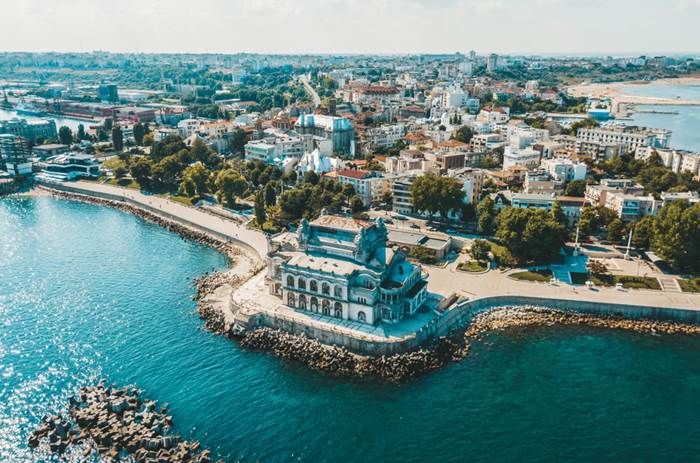 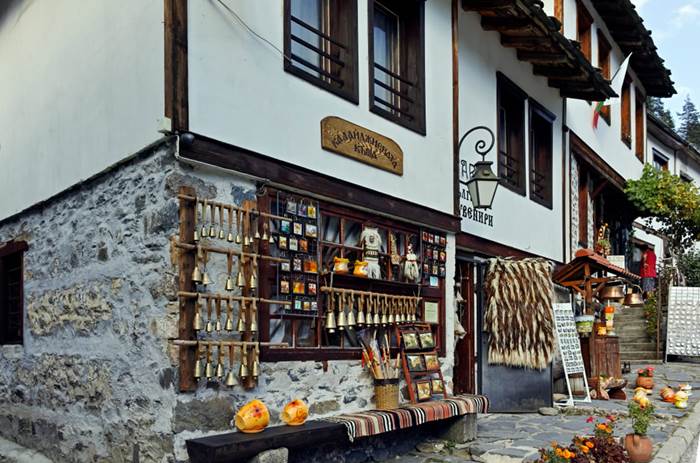 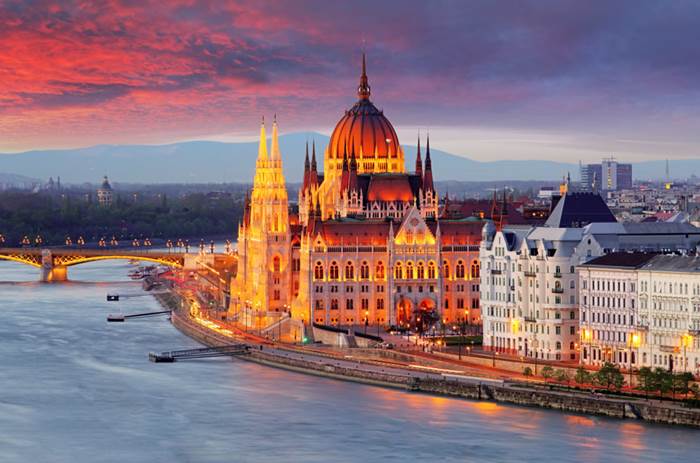 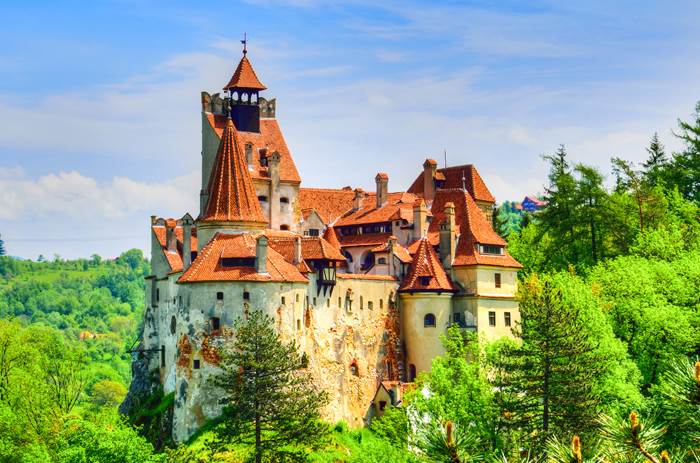 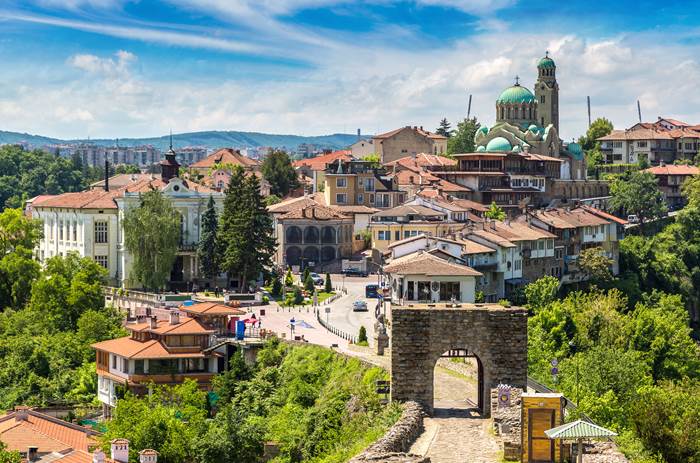 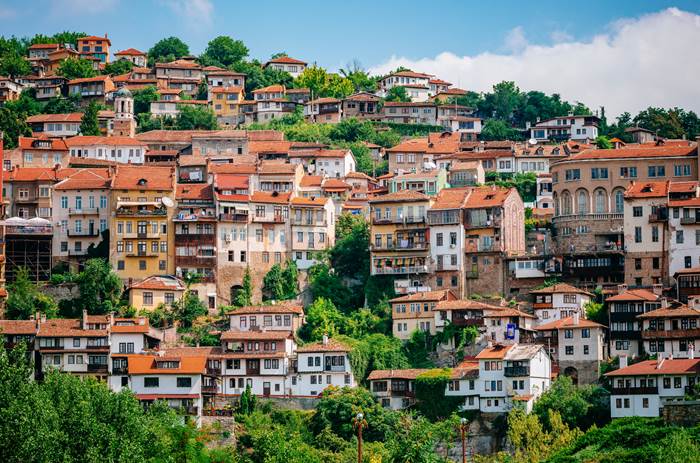 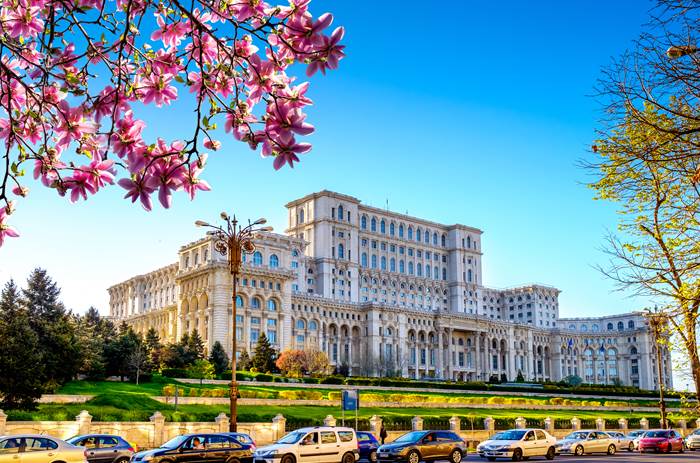 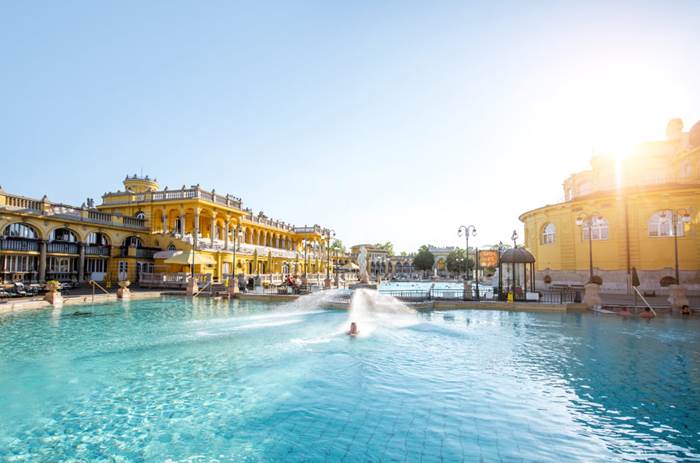 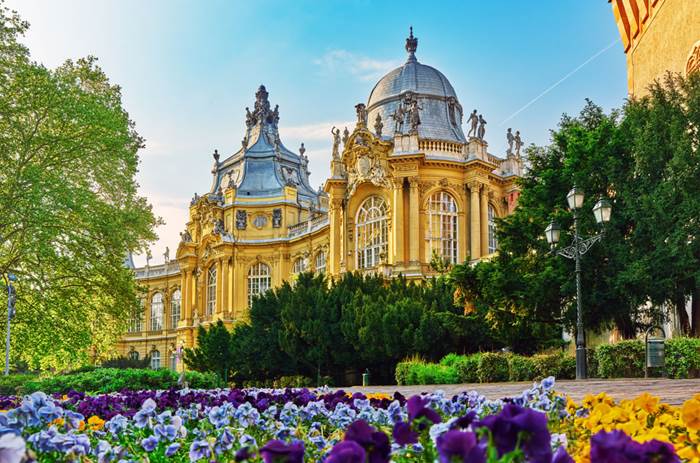 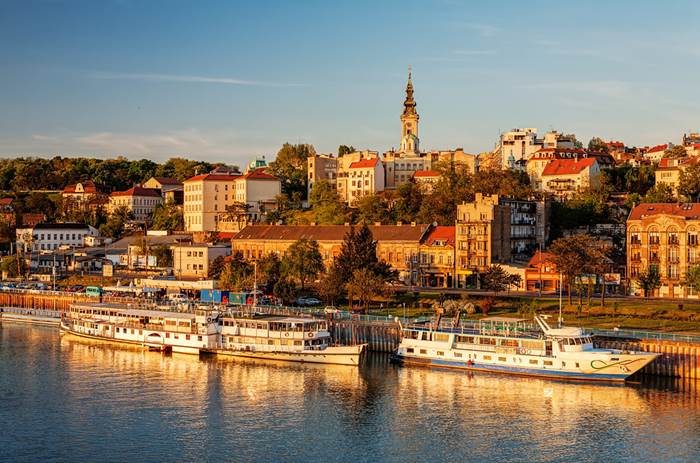 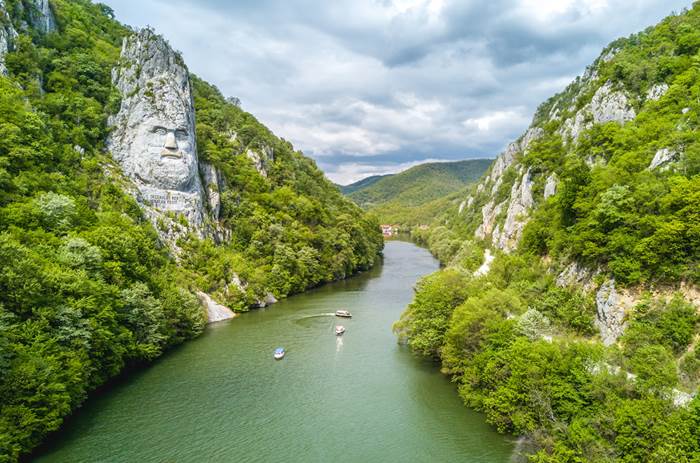 Explore the romantic lower Danube on a Budapest river cruise through the heart of Central Europe, where East and West meet and entertwine in fascinating cultures and turbulent history. Glide past medieval monasteries, citadels and villages... Discover resort towns along Romania’s Black Sea Coast, explore an ancient Christian necropolis in Pecs, and visit "Dracula’s" castle in Transylvania... dine in the Soviet-style People’s Palace in Bucharest...

Share homemade refreshments in the home of a Croatian family rebuilding their lives in postwar Vukovar, and listen to Béla Bartók’s piano music at a recital in his Budapest home. Experience authentic local cuisine, music and dance, and a wealth of architectural wonders as your river cruise winds its way through Hungary, Croatia, Serbia, Bulgaria and Romania, with nights on land at luxury hotels in the popular cities of Bucharest and Budapest (the Paris of Eastern Europe).

A choice of sightseeing in Romania features the legacy of Vlad Tepes (a.k.a. "Vlad the Impaler"), the historical model for the character of Dracula. Take a full-day trip to tour Bran Castle in Transylvania, which the 15th-century prince once used as a fortress during his military campaigns. Alternatively, take a morning visit by boat to isolated Snagov Monastery, set on a tiny island in the middle of a lake, said to be the infamous Tepes' final resting place; stop at Caldarusani Monastery, home to centuries-old art, before returning to Bucharest for an afternoon spent as you please. Enjoy a free evening tonight – there is lots of great dining in Bucharest! (B,L)

More choices in sightseeing – and the start of your lower Danube cruise – await you today. Before embarking your riverboat, you can choose to explore Bucharest with our local guides, seeing Revolution Square and the Triumphal Arch, and visit the massive People's Palace, home to the Romanian Parliament and the world's second-largest building after the Pentagon. Or drive to Romania's popular Black Sea coast – first to Eforie Nord for lunch at a traditional Romanian folk wedding performance, then to the port city of Constanta. Here, in what was originally the ancient Greek colony of Tomis, you'll view numerous Greek and Roman antiquities, an Art-Nouveau casino, and a monument to the Roman poet Ovid, who spent years in exile here. Continue on to Cernavoda and board your riverboat to launch your lower Danube cruise. (B,L,D)

Arrive in Ruse, Bulgaria, for excursions to nearby towns. In Arbanassi, known for its richly ornamented architecture, you'll have an opportunity to visit the Archangels Michael & Gabriel Church and the historic Konstant-Salieva House. Continue on to Bulgaria's medieval capital of Veliko Turnovo, whose ancient walled fortress and castle are set atop three hills overlooking the Yantra River. Rejoin the riverboat in Svishtov; enjoy traditional cuisine for dinner and a Bulgarian cultural performance aboard ship this evening. (B,L,D)

Kick back and enjoy the views of fields and vineyards studded with medieval towns as your riverboat cruises the Danube through the scenic heartland of Eastern Europe today. Learn all about imagery and symbolism in Iconography during an on-board lecture and demonstration in Vidin, where you can join us for a walking tour through its cobblestone streets and a visit to the imposing Baba Vida fortress. Bulgaria's best-preserved medieval castle, it dates back a thousand years and is named for the legendary Danubian princess said to have built it – its name means "Granny Vida." (B,L,D)

On another relaxing day on your Danube cruise, sail along the Bulgarian / Romanian border, enjoying great views of the Transylvanian Alps. As you cruise, keep an eye out for a kingly face carved into the Danube's rocky bank on the Romanian side; it's a monument to the 2nd-century Dacian King Decebalus, who defended his kingdom from the invading Romans – and it's the tallest rock sculpture in Europe. Glide through Romania’s Kazan Narrows and the Iron Gate of the Danube, a spectacular two-mile-long series of gorges between the Carpathian and Balkan Mountains, en route to Serbia. (B,L,D)

Dock in Belgrade, Serbia's modern capital at the juncture of the Danube and Sava rivers. Sightseeing includes visits to Tito's Memorial and the formidable Kalemegdan Fortress, and views of St. Sava Church, busy Slavija Square (now one of the city's major squares, but once a large pool where residents hunted wild ducks!), Parliament, Republic Square and City Hall. Following a Serbian lunch at Milos Palace, a former royal residence, enjoy a special private reception at the Royal Palace of Dedinje in Belgrade, built in the 1920s and now home to HRH Crown Prince Alexander II of Serbia and his family. Return to the riverboat, where a Serbian folkloric group entertains you this evening. (B,L,D)

Your Danube cruise crosses the border from Serbia to Croatia and arrives in historic Vukovar. Preceded by an onboard lecture on Croatia's turbulent history by a local expert, your tour of this venerable 10th-century city – once showcasing opulent 18th-century Baroque mansions, but now a mix of old and new – poignantly symbolizes the effects of the 1990s war. Visit with a Vukovar family who have recently returned to resume their lives in the city after the conflict, as they share homemade refreshments with you in their private home. You'll have some time at leisure in Vukovar before the riverboat continues on to Hungary tonight. (B,L,D)

Continue your lower Danube cruise to Kalocsa, Hungary – known for its folk art and its paprika – where you'll learn about the production and history in Hungary of this popular spice made from bell peppers at the Paprika House. Visit the beautiful Rococo library in the Baroque Bishop’s Palace in Kalocsa, housing one of the finest early collections in Europe, and enjoy a tasting of local vintages at Hungarian winery. Tonight, attend the Captain's farewell cocktail reception and dinner aboard ship as your Danube cruise draws to a close. (B,L,D)

Bid your Danube cruise – along with your Captain and crew – farewell as you disembark the riverboat in Budapest. Your exploration of the Hungarian capital, once the independent cities of Buda and Pest, begins in Pest with a visit to St. Stephen’s Basilica, the city’s neo-Renaissance cathedral, and continues with views of the Parliament building, a neo-Gothic masterpiece; Heroes’ Square, bounded by some of the finest architectural works in Hungary; and such Budapest treasures as City Park and tree-lined Andrassy Avenue. Stop to browse at Central Market Hall before checking into your hotel; the rest of the day and evening is at your leisure in Budapest. (B)

In Budapest this morning, check out the musical legacy of composer Béla Bartók at a museum and memorial housed in his 1924 home on the outskirts of Buda, and listen to his melodies in a piano recital. Revisit Budapest's World War II and Cold War days at the Sziklakórház ("Hospital in the Rock"), a re-creation of underground military medical and facilities in a former secret bunker and hospital hidden below Buda Castle. Walk up to Castle Hill, a UNESCO World Heritage Site, with your local guide to see architectural landmarks including Fishermen's Bastion. After time to explore this fascinating city as you please, Tauck invite you to join us at this evening's farewell reception and dinner at the Akademia Club in the Hungarian Academy of Sciences. (B,D)

The Ritz-Carlton, Budapest is ideally located in the heart of Budapest, close to the city’s major sights. Set within an 18th-century building, the hotel is surrounded by history, with the UNESCO World Heritage Buda Castle nearby and views of St. Stephen’s Basilica and Erzsébet Square from many guest rooms; the hotel’s staff enjoys an excellent reputation for their friendliness and enthusiastic efficiency. Lushly decorated guest rooms offer many amenities including coffee maker, minibar and televisions with cable and satellite channels. Deak St. Kitchen serves Hungarian-inspired dishes, using local seasonal ingredients alongside one of the city’s finest selections of Hungarian wines and beers in a relaxed and atmospheric environment – and an elegant outside terrace Hungarian wine Bar & Grill serves award-winning wines and international comfort favorites from local ingredients with a Budapest twist. Kupola Lounge features continental and full breakfast and reinvented modern breakfast dishes underneath a magnificent stained glass cupola, and Kupola Bar is the perfect meeting spot for inventive cocktails and drinks plus classic dishes. And in the Health Club, guests can take advantage of the tranquility of the indoor swimming pool crowned by a glass roof, as well as exercise equipment and a whirlpool.

The 443-foot (135-meter) riverboats of Tauck's Destination Fleet – including ms Joy and ms Savor (operating on the Danube), and ms Grace and ms Inspire (operating on the Rhine) – continue to set standards for quality, comfort, the most space per guest, and the most suites on Europe’s rivers. These longer ships (443 feet or 135 meters in length) accommodate a maximum of 130 guests in a total of 67 cabins. 22 suites (300 sq. ft.) offer walk-in closets, spacious baths, and two French balconies with floor-to-ceiling windows. 32 cabins (225 sq. ft.) include 8 innovative “loft cabins” providing additional light and views on the lower deck. Standard cabins (150 sq. ft.) are comfortable and similar in décor to our suites. All have in-room movies, minibar, adjustable heating & cooling, a private bathroom with shower and sumptuous toiletries and bedding. Public spaces boast panoramic windows, a Sun Deck, a casual dining venue – Arthur's – a panoramic cocktail lounge and our main dining room, The Compass Rose.

Enjoying a prestigious location next to the Parliament Palace in the heart of the city, the JW Marriott Bucharest Grand Hotel is a top choice of European royalty, heads of state and international dignitaries. A veritable “city within a city,” the hotel has a shopping gallery, a casino, a state-of-the-art fitness club and six of the finest restaurants in Bucharest. Among the most spacious in the city, guest rooms welcome with broadband Internet, flat-screen TV with cable channels, minibar, in-room safe, iron and ironing board, hair dryer, Revive bath amenities and separate bathtub and shower. The World Class Health Academy offers an indoor swimming pool, squash court, cardio equipment and free weights, sauna and steam room, as well as spa services and treatments. Dining options abound and Champions – The American Sports Bar & Lounge tempts with libations and sports scores. 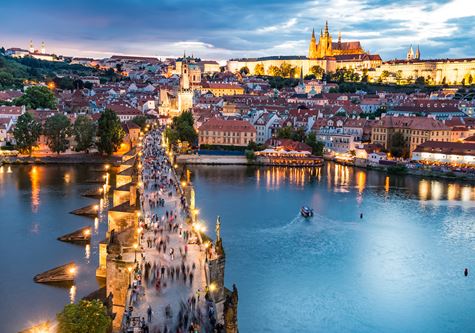 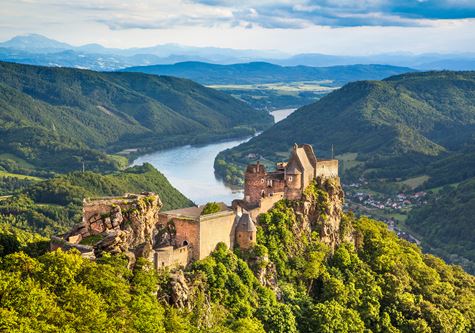 Tauck The Blue Danube Cruise
This luxury river cruise intimately takes you on a luxury tour from Prague to Budapest with exclusive private tours allowing you to experience highlights of the Danube in a luxury cruise.
from £4640 (per person) 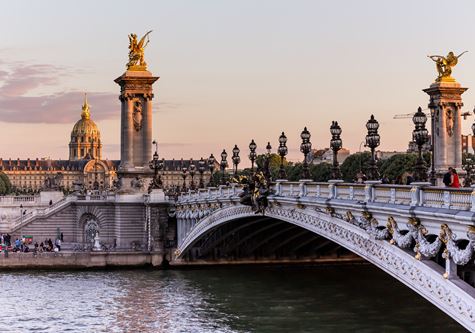 Tauck Bon Voyage! France Family River Cruise
Kids of all ages love France and all things Français... Paris, where wide boulevards, like the Champs Élysées, mean wide open spaces filled with cafés, famous brasseries and shops of every kind... new food experiences, from divine pastries to fantastic bread and the most sublime "chocolat"... the fantastic Seine... a scavenger hunt through the Louvre...
from £3450 (per person) 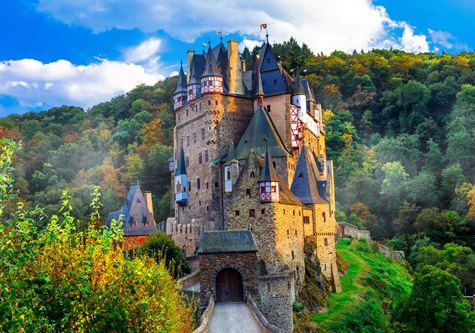 Tauck Castles on the Rhine: Family Riverboat Adventure
Join Tauck on this 7-night Basel to Amsterdam riverboat cruise along the Rhine River visiting Switzerland, France, Germany and The Netherlands. 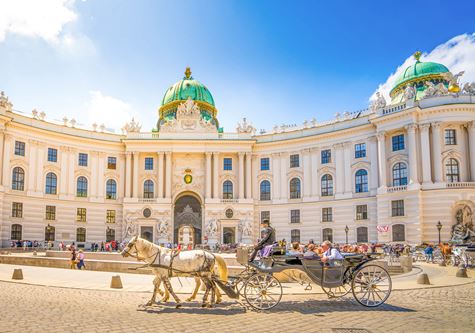 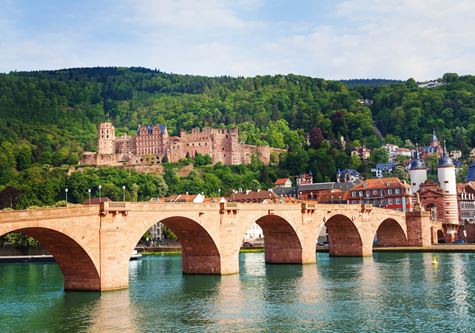 Tauck - The Rhine & Moselle Cruise
So many delights await you on our enchanting Moselle and Rhine river tours featuring a 12-night cruise between Basel and Amsterdam aboard ms Inspire or ms Grace.
from £4260 (per person)
Why Book With Us?
Find Out More