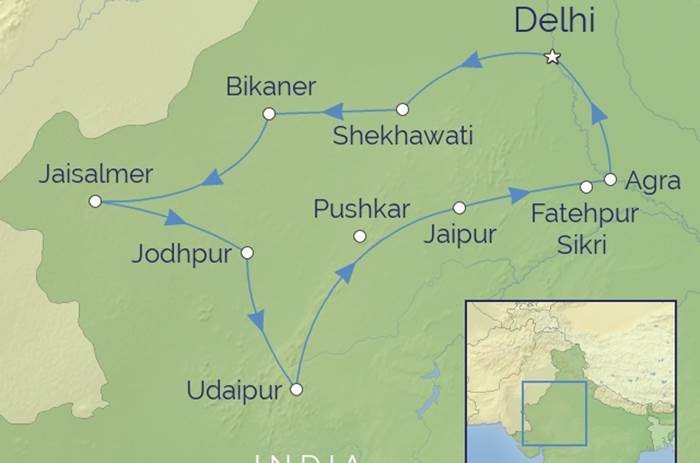 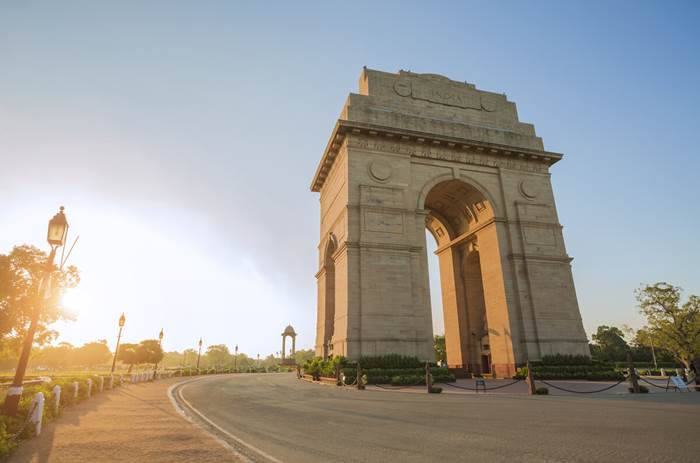 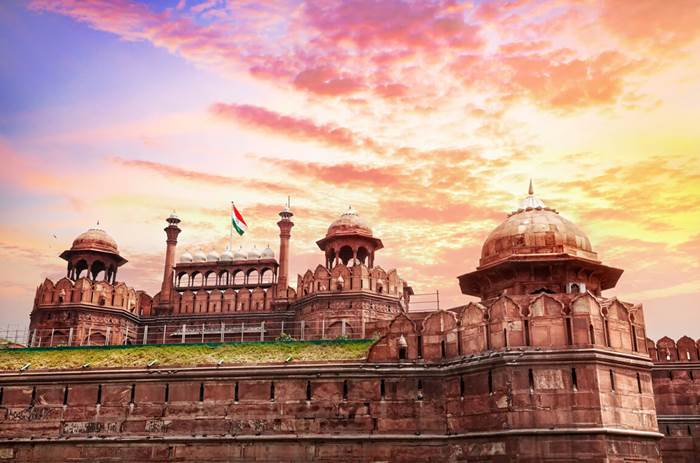 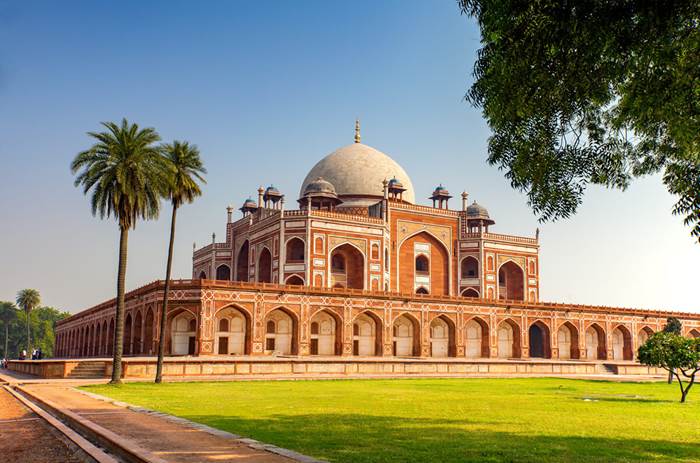 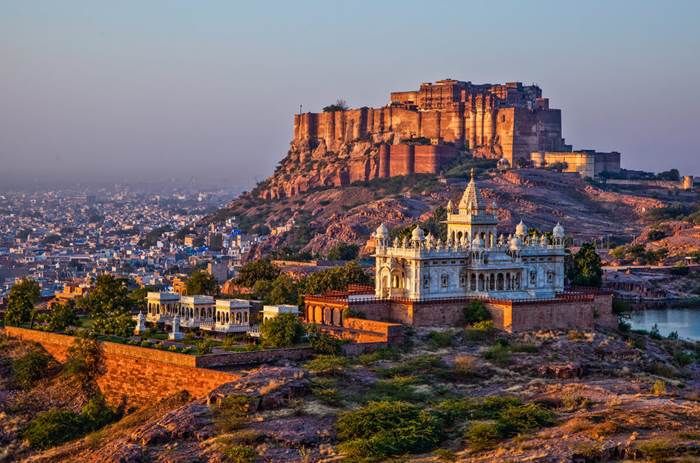 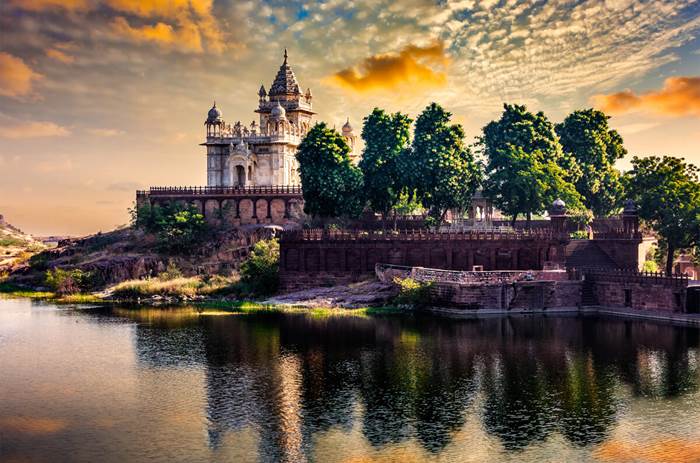 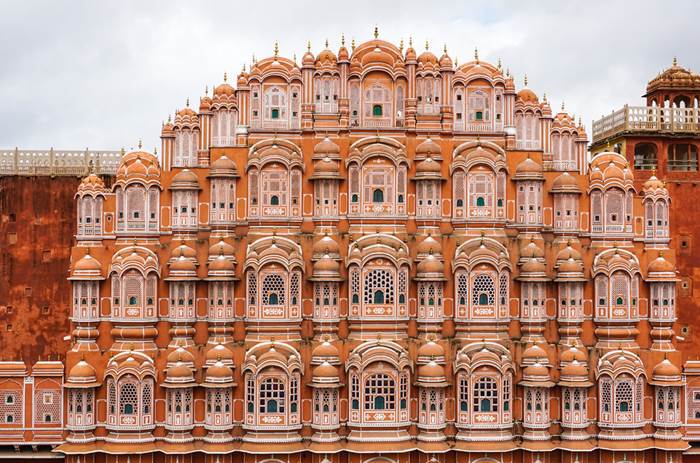 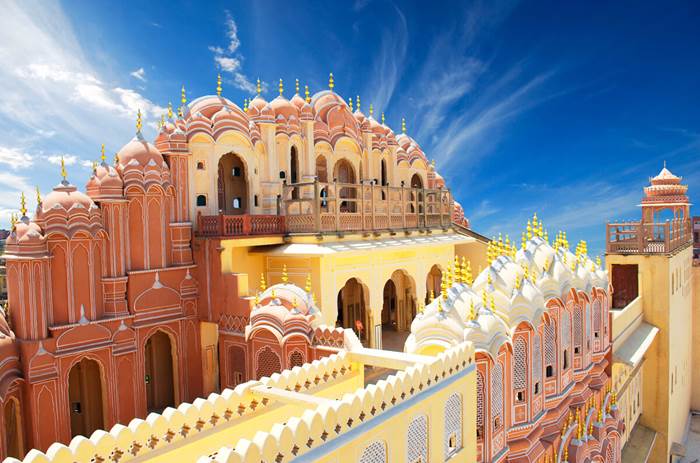 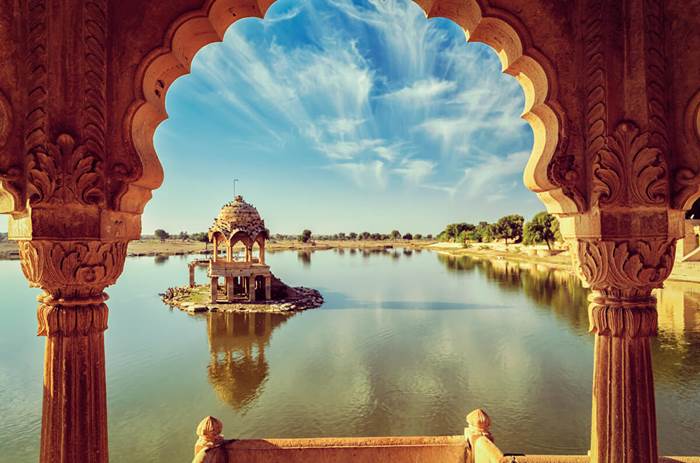 Get ready to immerse yourself in Indian culture at its best with this 15-day tour of the colourful and exotic state of Rajasthan. From grand forts to magnificent palaces and desert scenery, this tour takes you into the heart of Rajasthan, visiting the iconic cities of Udaipur, Jaipur and Jodhpur – home of the most impressive fort in India.

Arrive and transfer to the Radisson Blue Paschim Vihar (or similar) for 2 nights.

In the morning, take a guided tour of Old Delhi and New Delhi, which includes a drive past the Red Fort, a visit to Jama Masjid, one of the largest mosques in Asia, and Raj Ghat, the simple but moving memorial to Mahatma Gandhi. Later, drive past the imposing India Gate (War Memorial Arch), Parliament buildings and Rashtrapati Bhavan (the president’s residence). End the tour with a visit to Qutb Minar, a masterpiece of perfect proportions, and the tomb of Emperor Humayun.

Drive to the fabulous Shekhawati region, also known as the open-air art gallery of Rajasthan. Transfer to the Desert Resort in Mandawa (or similar) for 1 night. Later this afternoon, explore the beautiful havelis in this semi-desert region.

This morning, drive to Bikaner and transfer to the Narendra Bhawan Bikaner (or similar) for 1 night. In the afternoon, take a tour of Junagarh fort, unusual for not being built on a hilltop. Later, take a walk around the local bazaar.

This morning, drive to the golden city of Jaisalmer and transfer to the Gorbandh Palace (or similar) for 2 nights.

In the morning, explore Jaisalmer fort, one of the largest in the world. Also visit Gadisagar lake, a rainwater reservoir built in 1367, the Folklore Museum and the famous Nathwon and Patwon Ki havelis. Later in the afternoon, drive to the outskirts of Jaisalmer for a camel ride and to view the sun setting against the sand dunes.

Drive to the blue city of Jodhpur in the morning. Later in the afternoon, enjoy a guided tour of Jodhpur. Visit the formidable 5km-long Mehrangarh fort, which is set on a hill. Continue to Jaswant Thada, a white marble memorial to Maharaja Jaswant Singh II. Transfer to the Indana Resort (or similar) for 1 night.

Drive to the romantic city of Udaipur this morning, visiting the beautiful Jain temples at Ranakpur en route. On arrival in Udaipur, check into the Lalit Laxmi Niwas Palace (or similar) for a 2-night stay.

Morning drive to the royal city of Jaipur. Transfer to the Lalit hotel (or similar) for a 2-night stay.

This morning, make a photo-stop at the Palace of Winds, which has a spectacular facade, before a tour of the fabulous Amber Fort. Located at the top of a hill, Amber Fort offers a magnificent view of the old town below. In the afternoon, take a tour of the royal city of Jaipur. Highlights include a visit to the City Palace Museum, which has a superb collection of Rajasthani costumes and Mughal and Rajput armoury, the Jantar Mantar observatory and the colourful bazaars.

Drive to Agra this morning, visiting Fatehpur Sikri, the beautiful deserted capital of Emperor Akbar, en route. On arrival in Agra, check into the Radisson Blu (or similar). Afternoon visit to the world-renowned Taj Mahal.

Transfer to the airport for the Virgin Atlantic flight to London.

Gorbandh Palace is ideally located in the desert city of Jaisalmer. The hotel has spectacular views of the fort and is close to the nearby sand dunes. Its design was inspired by the traditional Indian housing, and features a central courtyard with accommodation around it. In keeping with Jaisalmer's magnificent fort, the hotel is built of yellow sandstone. There are 64 de luxe rooms and 3 de luxe suites. The rooms are spacious with private balconies overlooking the lawns, swimming pool and the Jaisalmer Fort. They are air-conditioned with satellite TV, telephone, tea/coffee making facilities and mini bar. Suites offer the additional features of a king size bed and a large bar. Gorbandh Palace was the first hotel in Jaisalmer to feature a swimming pool, and guests can enjoy an array of Indian, Chinese and Continental cuisine at either of the hotel's two restaurants.

The Indana Palace Jodhpur is located 3km from the Umaid Bhawan Palace Museum and 10km from the Mehrangarh Fort close to Jodhpur airport. The property features architecture and interiors furnished with traditional carved furniture, hand-painted walls, marble floors and ethnic jali art work, aimed at creating the feel of a traditional Rajasthani haveli. The property offers 88 individually decorated, air-conditioned rooms equipped with satellite television, a minibar and tea / coffee making facilities. Free wireless internet access is available throughout the property. Dining options include the Indian, continental and Chinese menu of the main Anghiti restaurant and lighter fare served throughout the day at I Bar and the Lotus Café.

Situated just outside of Mandawa, the desert resort is comprised of a number of mud buildings - cottages and two storey buildings - constructed in a traditional tribal desert style. The exteriors are decorated with traditional lime paste, mandana, or rice flour patterns which are reworked daily by women from the village, while the interiors are decorated with mirror-work and glass beads. All rooms are air-conditioned and are ensuite.

A heritage property located in the desert town of Bikaner, the impressive Narendra Bhawan was home to the last reigning Maharaja of Bikaner. Traditional Rajasthani décor can be found throughout the property which continues in the guest rooms where elaborate ceilings, Bikaner terrazzo floors and traditional crafts can be found. The luxuriously infinity swimming pool sits on the roof of the property offering splendid views over the town. Mad Hatter - the Bake House produces traditional confectionary and baked good whist in the dining room you will be served dishes once favoured by the royals. Guests can enjoy seasonal evening entertainment and tours of the palace can be arranged.

Conveniently located adjacent to both international and domestic airport terminals, the Novotel New Delhi Aerocity is a large comfortable hotel in close vicinity to several excellent restaurants and shopping malls. Guestrooms are spacious and contemporary in design with all the amenities you would expect from a modern hotel.

Radisson Blu Agra Taj East Gate, Agra
Located near the east gate that leads to the renowned Taj Mahal, the Radisson Blu Agra Taj East Gate is a modern hotel. Each of the 141 rooms and suites are comfortably furnished and decorated in soft shades to create a warm and inviting atmosphere. Hotel facilities include a 24-hour coffee shop with international flair, a tea lounge for a quick bite and a liquid lounge with an extensive wine list.

Located on the outer ring road of west Delhi, close to many excellent restaurants and shops, the Radisson Blu Hotel New Delhi Paschim Vihar is a comfortable hotel with modern amenities. The rooms are designed in a neo-gothic style and blend beautiful design with comfortable furnishings. The rooftop restaurant offers views over the city and the two restaurants serve both Indian and international cuisine

Located close to the airport in the heart of the commercial district of the city, The LaLiT Jaipur is a modern property designed to reflect elements of the local haveli architecture. The hotel offers 244 elegantly designed rooms with wooden flooring and large spa-style bathrooms, complimented by traditional Rajasthan artwork and luxury furnishings. All rooms are equipped with all modern amenities including satellite television, minibar, in-room safe and wireless internet access. The hotel has a variety of dining options for guests to choose from serving a range of pan-Indian and international cuisine.

Built by Maharana Bhupal Singh as a royal guesthouse, this hilltop retreat overlooks the serene Fatehsagar Lake. Today, The LaLiT Laxmi Vilas Palace Udaipur recreates the courtly and graceful ambience of a bygone era. There are 55 well appointed guest rooms and suites with private bath, hot and cold water, telephone and colour television.

Amritsar, India
2 Nights
Amritsar, the holy city of the Sikhs, is the location of their most sacred shrine – the Darbar Sahib or Golden Temple. Fashioned in marble, mirror work and gold, it is beautifully reflected in the surrounding expanse of water.

Day 1: Fly to Goa
Fly to Goa. Transfer to Taj Exotica* in south Goa for 4 nights. This luxury resort is set in lush greenery and overlooks the Arabian Sea. (B)
Days 2-4: Goa
At leisure or enjoy a tour of Old Goa and Panjim or alternatively visit Dudhsagar falls and a spice plantation. (B)
Day 5: Fly to London via Mumbai
Transfer to the airport and fly to London, via Mumbai (Bombay). (B)

Hyderabad
3 Nights
In 1590 Quli Qutub Shah started to plan ‘a replica of Paradise itself’ and Hyderabad, the pearl of the Deccan, came into being. The city embodies a culture of gracious living, gourmet cooking and stylish dressing.

Mumbai
3 Nights
Packed with colonial-era architecture and home to India’s most prolific film industry, the ‘City of Dreams’ is a melting pot of vibrant bazaars, temples, galleries and excellent restaurants.

Day 1: Fly to Mumbai
Fly to Mumbai (Bombay). Transfer to Trident Mumbai, located on Marine Drive, for a 3-night stay. (B)
Days 2-3: Mumbai
At leisure or spend your days wandering through Chor bazaar, known as the ‘thieves market’ and one of the largest flea markets in India; exploring Asia’s largest slum in Dharavi; strolling through the heritage village of Khotachiwadi with its Portuguese-inspired dwellings; taking a Mumbai culinary tour; or visiting Kala Ghoda, an area that houses some of the city’s finest art galleries and museums. (B)
Day 4: Fly to London
Transfer to the airport and fly to London. (B)

This tour is fully escorted throughout by a local tour manager from arrival in Delhi.

Non-exclusive departures are based in 4- and 5-star accommodation and are not exclusive to Cox & Kings clients.

This tour is paced to cover the major sights of Rajasthan. It involves some one-night stays and, on occasion, lengthy road journeys. 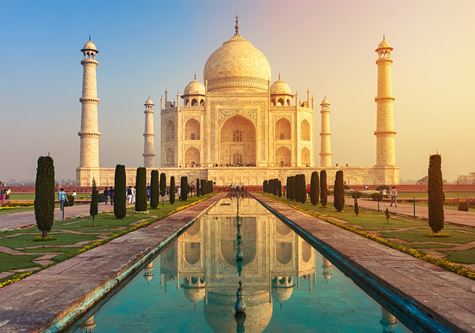 Cox & Kings Golden Triangle & Shimla
Explore India's most iconic sites on this 13-day tour visiting some of the country's most beautiful regions. From watching the sunset over one of the seventh wonders of the world to marvelling at the grandeur of the Red Fort and the majestic Amber Fort, get ready to soak up the rich cultural heritage of what was once the jewel in the empire. 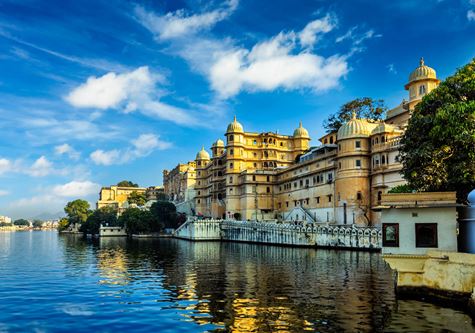 Cox & Kings Classic Rajasthan
Get ready to immerse yourself in Indian culture at its best with this 15-day tour of the colourful and exotic state of Rajasthan. From grand forts to magnificent palaces and desert scenery, this tour takes you into the heart of Rajasthan, visiting the iconic cities of Udaipur, Jaipur and Jodhpur – home of the most impressive fort in India. 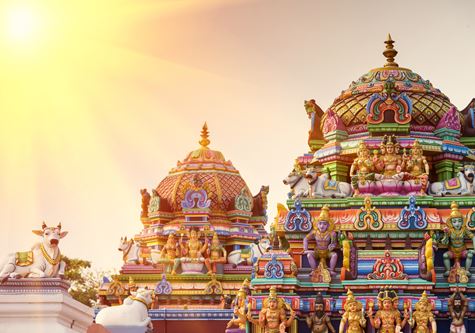 Cox & Kings Treasures of Southern India
This journey travels through hill stations, tropical backwaters and temple-laden towns while staying in some of the region’s very best hotels. 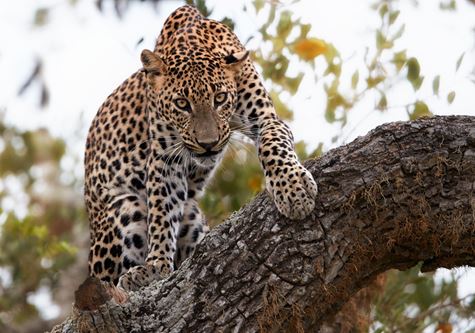 Cox & Kings Sri Lanka - The Enchanted Island
Formerly the island of Ceylon, Sri Lanka has an abundance of natural treasures, historic towns and archaeological ruins for you to discover. The fabulous tour will take you on an exotic journey to the lesser-known sites in Northern, southern and central Sri Lanka.
Why Book With Us?
Find Out More