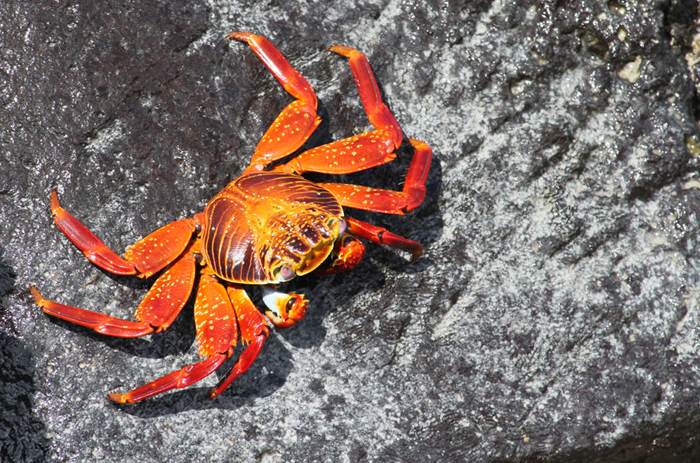 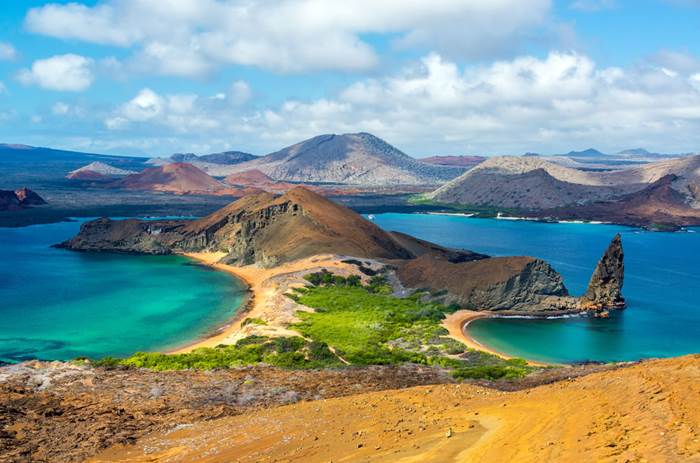 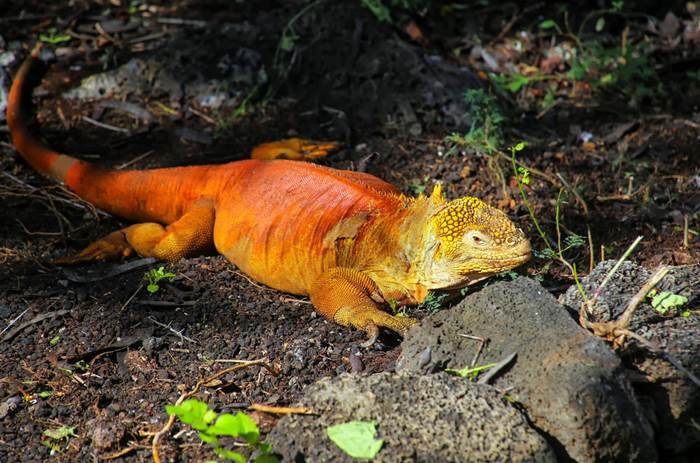 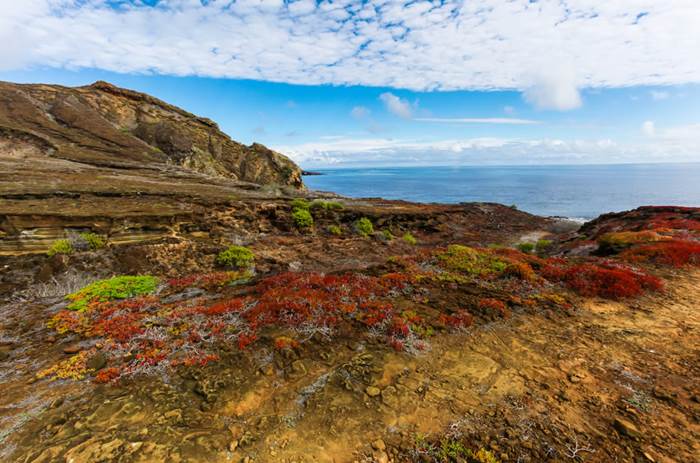 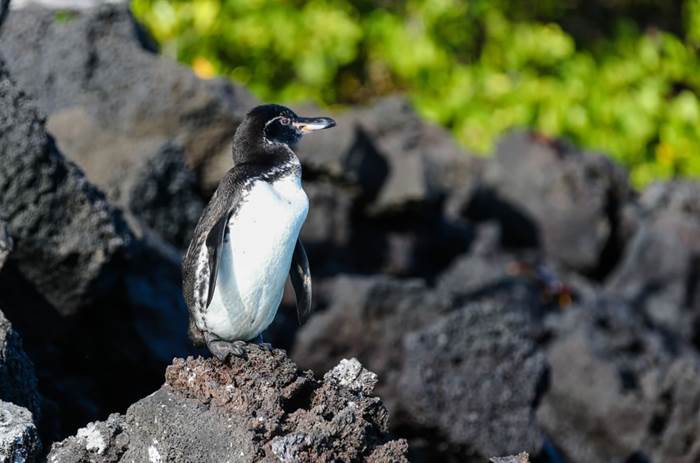 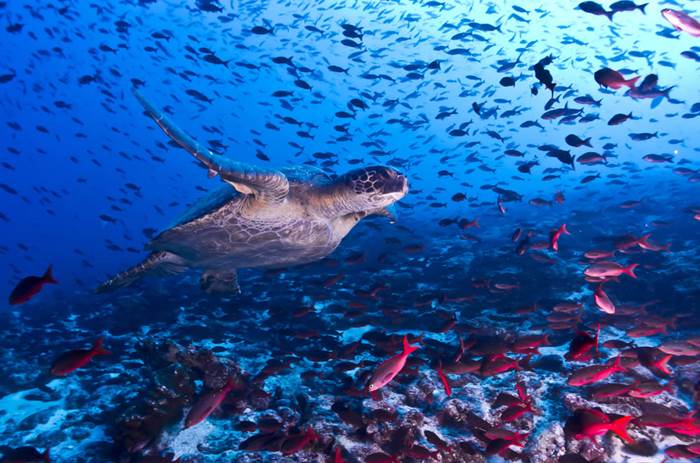 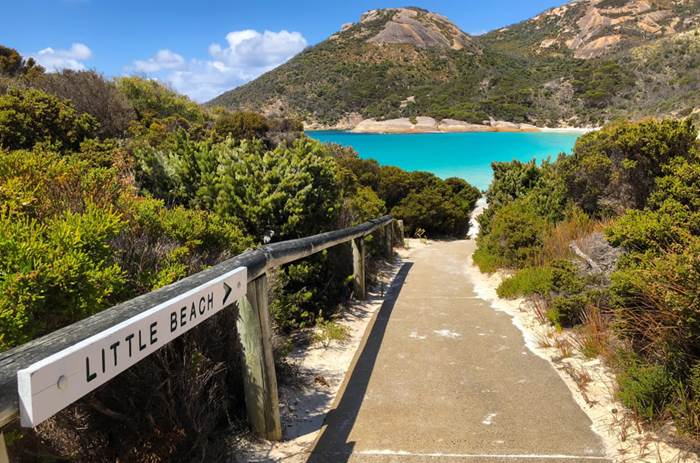 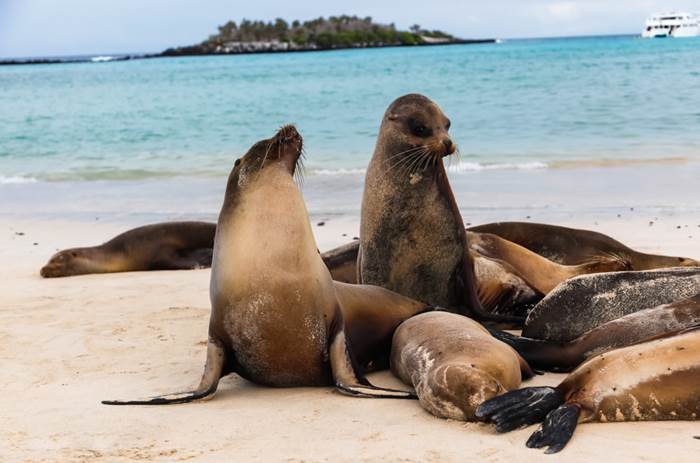 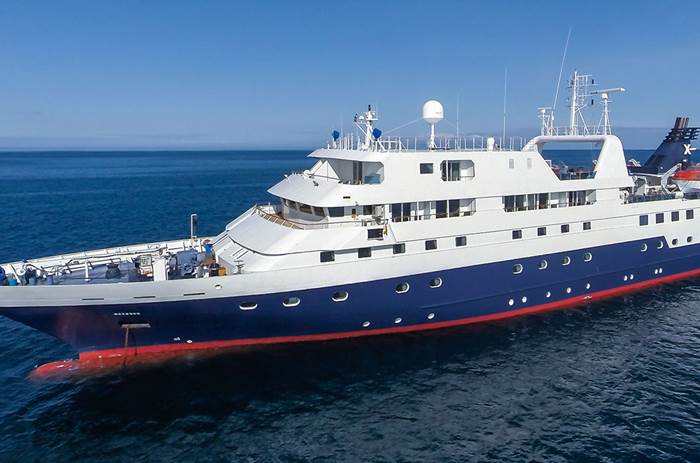 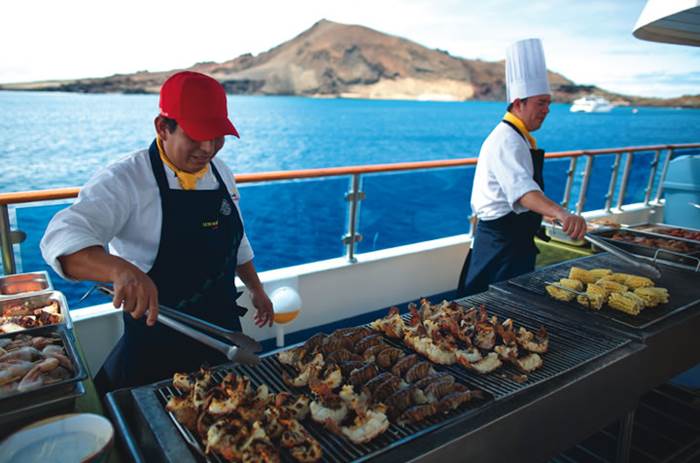 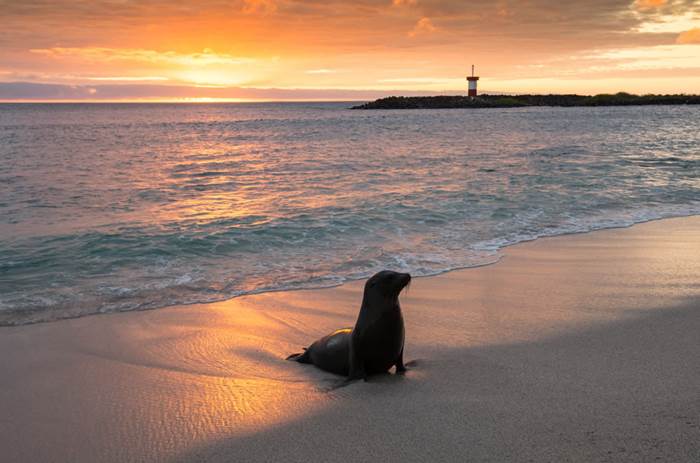 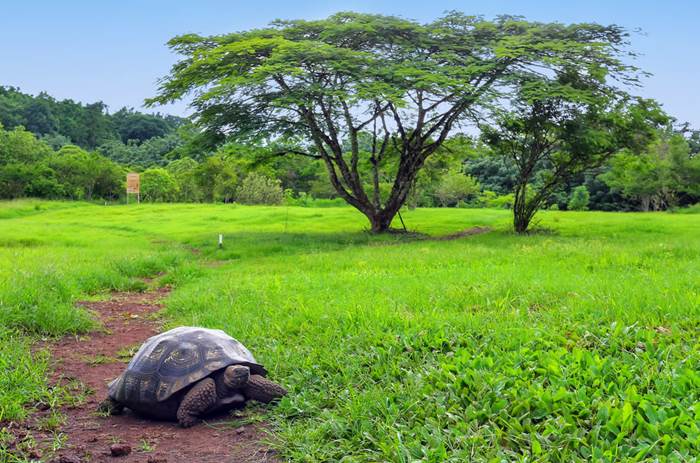 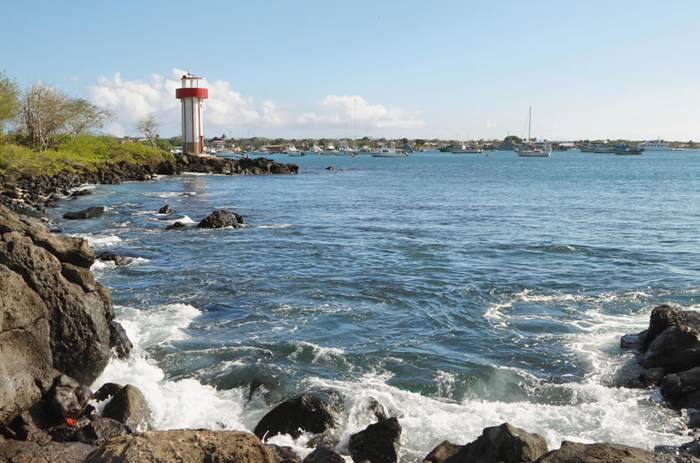 The Galàpagos Islands are like nowhere else on earth, and Celebrity Cruises are one of only a few cruise lines to offer all-inclusive cruises here.  Consisting of 19 islands and 42 islets that all rose from the sea as the product of volcanic eruptions, these islands are between 3 million and 4 million years old.

North Seymour is a small island just north of Baltra. It is home to the largest colony of frigate birds in the Galapagos. While keeping an eye out for male frigates trying to impress potential mates with an inflated red neck pouch, you may see blue-footed boobies dancing in a timeless courtship ritual. Sea lions and large land iguanas also roam about this rocky terrain. Excursion options: Walk.

During World War II, Baltra served as a U.S. military base protecting the Panama Canal from enemy attack.

The visit at Santa Fe begins with a wet landing on the small beach in Barrington Bay on the northeast side of the island. Large numbers of sea lions are found on the beaches and can often be seen surfing in the waves. Some of the island’s endemic species include massive Santa Fe Opuntia cactus, the Galapagos Hawk, Galapagos Snake, rice rats, different types of finches, and the Galapagos Mockingbird. The visit includes a hike past saltbush where Galapagos hawks as well as the Santa Fe land iguanas tend to roam. While snorkeling, sea lions are the main attraction. Fish densities are fairly low, but there are occasional sightings of sea turtles and various rays. Excursion options: Walk, swim, kayak, snorkel, Zodiac.

One of two islands off Santa Cruz, South Plaza was born of upheaval, uplifted during a geologic event. This small, but beautiful rocky island is strewn with tall prickly pear cactus and roaming land iguanas, marine iguanas, along with a colony of sea lions. Numerous seabirds nest in and soar over the cliff on the high side of the island. Excursion options: Walk.

Here you have the opportunity to visit the small waterfront town of Puerto Baquerizo Moreno, the administrative capital of the islands. Excursion options: a tour of a local interpretation center and time for shopping or a fast-paced long walk to view scenic vistas, followed by a visit to the interpretation center.

Pitt Point is located on the northeastern tip of San Cristobal Island. After disembarking onto the small green sand beach, you will hike up to a plateau, where the view and landscape are so spectacular it is well worth the effort. A steep gully leads up the cliff to a breeding ground for all three varieties of boobies: Red-footed, Blue-footed and Nazca. It’s the only place in the Galapagos where you can see all three species nesting  together. Excursions options: Hike, kayak, snorkel, Zodiac.

Rich in history, this site is home to the post office barrel established in about 1793, where pirates, buccaneers, whalers, and others could leave their mail to be picked up by outbound ships. The tradition continues today, as visitors leave addressed postcards in the barrel and sort through mail left behind to deliver at home.

The Baroness’ Viewing Point is the ideal place to take in the unique scenery that defines Floreana, and to learn about the history of the island’s early settlers. Once inhabited by an indulgent baroness and her three lovers, the history of this island is intriguing. During the Zodiac ride around “La Loberia,” you can observe several marine species such as golden eagle rays, sea turtles, sea lions, mullets and occasionally Galapagos penguins. Excursion options: zodiac, walk.

Floreana was the first capital of the Galapagos, and where Charles Darwin met the islands’ Governor. Its small brackish lagoon is often home to flamingos, stilts, and white-cheeked pintail ducks, and one of its beaches is a popular nesting site for sea turtles. Check out the green-hued sand where you land! Excursion options: Walk and swim.

Champion lies east of Floreana and provides a wonderful opportunity for snorkeling and a Zodiac ride. When snorkeling, tropical fish abound with frequent sightings of sea turtles, rays, sharks, sea stars, and more. If you’re lucky, the sea lions will be in a playful mood. During a Zodiac ride along the rocky shoreline keep an eye out for seabirds such as boobies, pelicans, and frigate birds. Red-billed Tropicbirds nest in the crevices below the large prickly pear cacti and you may spy the very rare Charles Mockingbird. Excursion options: Snorkel, Zodiac.

Elizabeth Bay is one of the furthest points in the Galapagos visited on our cruise. You will enter a sheltered cove accessible only by Zodiac. It is a wonderful and secluded mangrove ecosystem that is a refuge, resting, and feeding site for sea turtles, rays, blue-footed boobies, flightless cormorants, penguins, pelicans, lava herons, and more. Excursion options: Zodiac.

Moreno Point, at the base of Cerro Azul Volcano, is dotted with lagoons that host a wide variety of wildlife. At first glance, Moreno Point appears to be covered by a flat featureless lava flow and devoid of life. Upon closer inspection and a short walk, much more is discovered within its oasis-like ponds that often host flamingos, paint-billed crakes, white cheeked pintails, and common gallinules. On the Zodiac ride keep your eyes out for Galapagos penguins, flightless cormorants, brown pelicans and blue-footed boobies. There may also be an opportunity to snorkel. Excursion options: Walk, Zodiac, deep water snorkel.

This is the main population center of the islands, and home to the National Park Service tortoise-breeding center and the Charles Darwin Research Station. Here you will have the opportunity to visit the tortoise breeding center and walk through the Charles Darwin Research Station. In addition, you can also take a bus ride to the highlands to observe giant tortoises in the wild and walk through a lava tunnel. Optional time for shopping will be available. Excursion options: Tortoise-breeding Center/Charles Darwin Center, Highlands.

The beach at Gardner Bay, with its sparkling white sand, offers one of the best places to relax and swim in the Galapagos. It is home to one of the most important colonies of sea lions in the archipelago, and is also a nesting site for sea turtles. Three species of Darwin’s finches and Española Mockingbirds may also be seen here. Excursion options: Swim, snorkel, and kayak.

Española is the oldest island in the Galapagos and home to an amazing variety and abundance of wildlife. Lazy sea lions often greet visitors at the rocky landing where bright red and green marine iguanas rest atop the sand and rocks. They are the only marine iguanas that remain brightly colored throughout the year. Suarez Point is also home to large populations of Nazca and blue-footed boobies, colorful Española Lava Lizards, Galapagos Hawks, Española Mockingbirds, three species of Darwin’s finches, Galapagos Doves, Swallowtailed Gulls and Red-billed Tropicbirds, which dash in and out of the cracks in the cliffs as well as the astounding waved albatross (between April and December). The 10,000 to 12,000 pairs of waved albatross on Española represent the vast majority of this species on the planet. They perform one of the most spectacular courtship rituals in the animal world. Excursion options: Hike.

Baltra is home to the region’s main airport, and where you will fly out. You will have a Zodiac and bus ride to the airport.

Upgrade your 7 night Galapagos cruise to a Galapagos Package of 10+ nights, and you'll enjoy all Galapagos 7 night cruise inclusions, plus:

Ocean View. With so many sights to see on your Galapagos Island cruise, a room with a view will add so much to your holiday.

Premium Ocean View. It’s the perfect tranquil space for you to rest on holiday – and after a day spent exploring the incredible Galapagos Islands, that rest will be well deserved.

As the first of our unique Xpedition Class, Celebrity Xpedition is a little different to the rest of the Celebrity Cruises fleet. Sailing to the legendary Galapagos Islands, Xpedition offers a once in a lifetime experience that is half luxury cruise, half intrepid exploration.

This smaller ship is the perfect place to relax after a day spent exploring the mythical Galapagos Islands. From the peace of the library to the serenity of the hot tub on the sun-soaked sunrise desk, you’ll soon find your personal favourite spot on Celebrity Xpedition.

You can also enjoy spectacular views of the natural wonders outside from the Blue Finch Bar on the Panorama Deck. The Discovery Lounge, with its warm and lively atmosphere, hosts daily lectures from a number of expert naturalists, preparing you for the rare and unique creatures awaiting you on the shores of the Galapagos Islands.